I have been a very remiss blogger recently. However, here is one of the things that has been keeping me occupied: the long-overdue redecoration and refurbishment of our living room. It is a long way from finished, but I thought I'd reveal how far we've got in the process.

The living room is the largest in our 60s chalet bungalow. It overlooks the back garden and is south facing. Visitors have, over the years, been witness to squareas of paint on the walls as we auditioned various possibilities while living with the increasingly worn and grubby buff or magnolia walls and cream beige carpet we'd inherited when we moved in. We could no longer ignore that the carpet pile had worn down to the backing, and the underlay in heavy traffic areas had totally disintegrated. The time had come to bite the bullet, reconsider our options and get on with it.

This is not quite a "before" collage, but shows the room in January, when we had removed the carpet to the dump and started filling the cracks and imperfections on the walls. 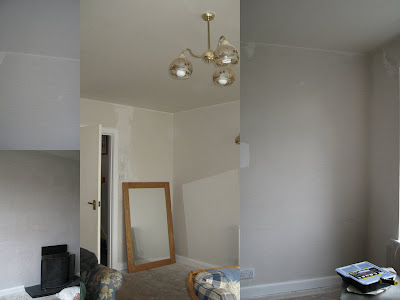 We had previously made some choices: we replaced the dominating stone fireplace with something more compact and modern, with a lovely slate hearth. We had also purchased some Anaglypta Fibretex wallpaper, as I fancied grass paper but decided that this was a good, tough textiley alternative (it is no longer available under this brand as far as I can tell, but googling glass fibre wallcoverings will come up with similar, if not identical, products). At the same time,we had scrim-taped the cracks in the ceiling between plasterboards, then papered with a textured paper and painted it in a silk finish white paint to try to reflect more light into the room. At that point, the process ground to a halt for whatever forgotten reasons were relevant at the time and we procrastinated once again.

Spending a lot of time in this room (home of the Magic Armchair, indeed), I felt the combination of patterned paper on the ceiling with patterned "paper" on the walls would be too much texture, and the textured ceiling married to the paint finish created an oppressive surface. 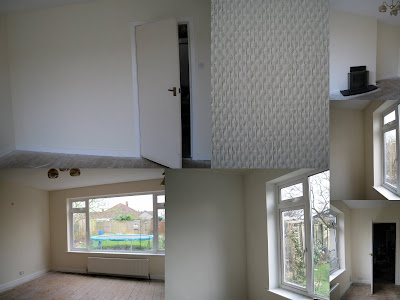 Now, we decided to strip the ceiling and repaper with a thick, plain lining paper before painting it with the Dulux Light and Space paint in white. We took advantage of the sales to order some leather seating in navy and an axminster carpet in a lovely colour named "Clay Pot". A number of tester pots in shades of creaminess later, we fixed on a warm pinky-yellowish shade of Light and Space called Sun Swirl. Flu and a bad back made us see the sense of getting someone in to do the paper stripping and hanging, which was done over five days by the lovely Bernie. Then came half term (and a trip to London). 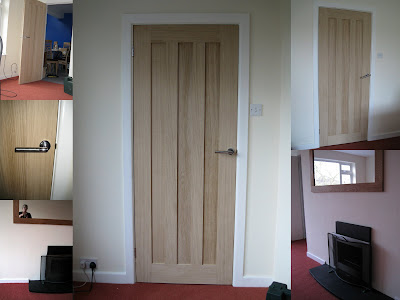 We just managed to complete all the painting before the men came yesterday to lay the carpet, and today we had oak doors fitted (which will be oiled to match the finish of the mirror on the chimney breast). These replace the flush panel original doors of the house, which were much battered and cracked by misuse (slamming).

This weekend will hopefully see (apart from some much-needed relaxation and recuperation) the installation of new lighting and playing with the layout of various key pieces of furniture as we do not expect the seating for about another month to six weeks or so. We are also awaiting delivery of a roman blind rail before we can install the curtain rail we have in readiness for the curtains I will make after other, more pressing, sewing projects, and we need to look out for some storage furniture and lamp tables and some art pieces for the walls.

I also need to do a very large amount of sewing (which is another story) and also investigate bathroom fittings, thanks to a leaky loo and its consequences. Never a dull moment!
Posted by Sue at Friday, February 27, 2009 6 comments: