Odd Girl Out by Laura James 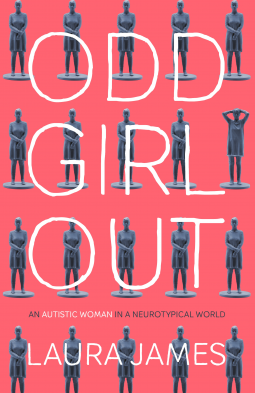 They said:- What do you do when you wake up in your mid-forties and realize you've been living a lie your whole life? Do you tell? Or do you keep it to yourself? Laura James found out that she was autistic as an adult, after she had forged a career for herself, married twice and raised four children. Odd Girl Out tracks the year of Laura's life after she receives a definitive diagnosis from her doctor, as she learns that 'different' doesn't need to mean 'less' and how there is a place for all of us, and it's never too late to find it. Laura draws on her professional and personal experiences and reflects on her life in the light of her diagnosis, which for her explains some of her differences; why, as a child, she felt happier spinning in circles than standing still and why she has always found it difficult to work in places with a lot of ambient noise. Although this is a personal story, the book has a wider focus too, exploring reasons for the lower rate of diagnosed autism in women and a wide range of topics including eating disorders and autism, marriage and motherhood. This memoir gives a timely account from a woman negotiating the autistic spectrum, from a poignant and personal perspective.

An absolutely fascinating account of living with autism which, as the song says, is different for girls.  The Rosie books by Graeme Simsion, and A Boy Made of Blocks, by Keith Stuart, are enjoyable to read as well as informative, but Laura James's experiences have been rather different and I found them very relatable.  There is food for thought not only in respect of autism but also in how we fail to respect and celebrate the differences we all have, and how we have to conform in order to deal with the world, instead of being able to find the way that individually works best for us.  It is a really well written book, and an engrossing and illuminating read.
Posted by Sue at Saturday, May 05, 2018