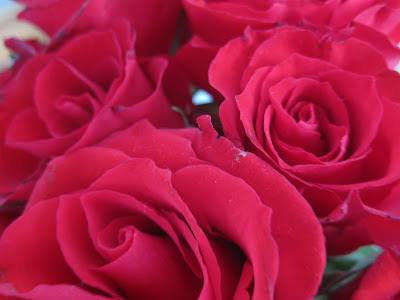 Flu is never fun, but flu in the summer seems particularly unjust, when you have to be tucked up in bed while others are out enjoying the weather, the countryside, the Festival of Quilts, Fibrefest.... Flu plus Tamiflu is especially not fun, but I won't go into further details: it beats flu and asthma and chest infections, just about, on balance.

My best-beloved hasn't been able to do the necessary tucking in, either. Just before we left our idyllic interlude in Austria, we heard (via Facebook!) that his mother had taken a fall on arrival in Istanbul for a week's package trip with her two daughters. She is 87 and had broken her hip. After a few days of agonising, he made a trip to see her. Happily, she was given a joint replacement and a new lease of life, and he was thrilled to see her and his sisters again.

Facebook was amazing, actually, putting us in touch with two people in Istanbul, friends of virtual friends, who were available and happy to give what help and support they could, and we are so grateful. Facing the unexpected in a country where you know no-one and do not speak the language is a terrifying ordeal, especially when it is more or less life-and-death serious. It helped so much to have contacts on the ground.

Anyway, back to my sickbed... Laptops with wireless internet certainly make coping with illness far easier, even to the extent of conversing with one's teens downstairs! I even got my diagnosis and medication prescription on line. Interludes between sleeping and misery have been spent catching up on such delights as "Jam and Jerusalem" and "Desperate Romantics" via BBC i-player, I've kept in touch via Google Reader, e-mail and news websites. I've even indulged in a very modest amount of shopping on-line in compensation for missing FoQ and Fibrefest.

I have always taken comfort in a good book or ten during spells in bed, and I've just finished a brilliant read: "The Telling" by Jo Baker. Is it a ghost story? It is well-written, engaging and thought-provoking, but not in a heavy way. I requested it (on line) from my local library, or I'd offer to lend it out, so I'll just have to recommend it. I'm now starting her previous book, "The Mermaid's Child", which promises to be similarly pleasurable.

My best beloved returned home on Saturday, relieved and happy that his Mum is doing so well and full of promises that we should return to visit Istanbul soon (and after all my Ottoman reading earlier in the year, that would be such a joy and fulfil an ambition). He returned to take a big bag of laundry to the launderette in town, some miles away, as of course the washing machine came out in sympathy with me, unblock the vacuum cleaner (ditto) and replenish the larder and fridge, much depleted by our mile-a-minute vine of a boy and going-to-Kent-Uni-in- September daughter, but not much by me. However, I did get a bottle of Lucozade and a bunch of red roses. What a star!
Posted by Sue at Monday, August 24, 2009 4 comments: 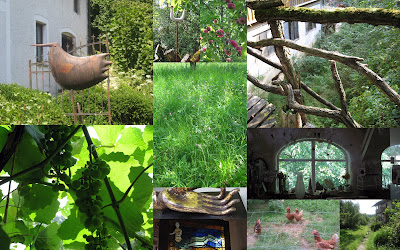 I'm lucky to be staying on a farm in Lower Austria, complete with artist's studio where my friend, Sara Lechner, makes her wonderful textile creations. The air is clean and fresh, there are fresh vegetables and fruit growing around us and the hens scratch around the house, then lay richly-yolked eggs. We are close to alpine countryside and lovely lakes. We are sleeping too much but it is good! I will blog more soon. It is good to be doing more real travelling instead of the magic armchair variety,and I am so grateful that this visit has been possible.