A touch of Monet 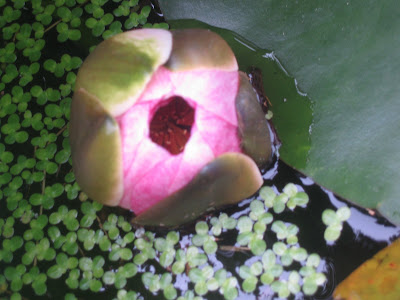 Nice weather for ducks, though - and waterlilies? 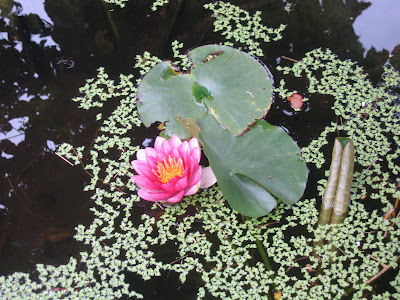 They are looking very lovely in our tadpole pond, which is due for refurbishment later in the year, when the tadpoles have grown up into frogs and are ready to leave home...
Posted by Sue at Tuesday, June 19, 2007 1 comment:

The garden has been battered by rain and wind over the past week or so, but there are gems to be found and wonderful scents to be enjoyed when the weather is being kinder than it is this afternoon.. 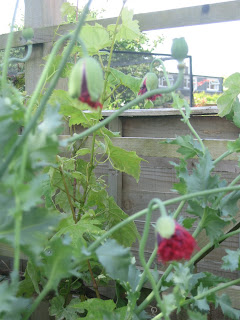 I'm glad that there are more shaggy red poppies to come. 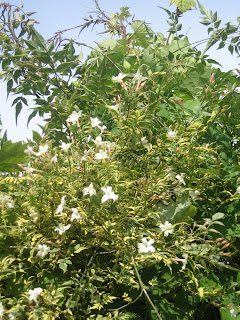 The jasmine is growing up through the grape vine along the fence. 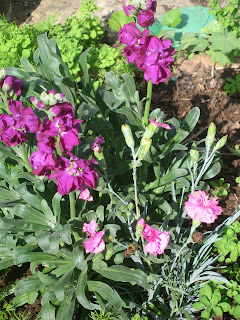 Stocks and Pinks are communing near the house. 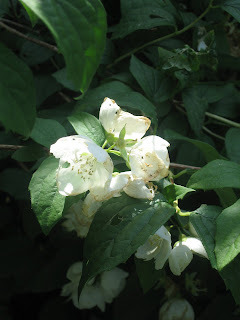 This Philadelphus smells wonderful during fine evenings but the rainfall is bruising its petals, poor thing.
Posted by Sue at Tuesday, June 19, 2007 No comments:

Knitting in the Round 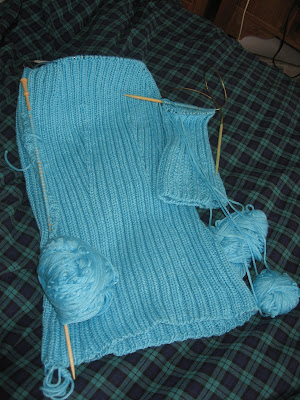 I'm very chuffed to have this opportunity to test drive Ysolda's Snow White knitting pattern, and it's growing well. The garment is knit in the round. I've used a circular needle for the body and am now working on a sleeve. I thought I had a set of dpns in the correct size for this project, but I was wrong. My DH very kindly took my car shopping on Saturday so he could fill it with petrol, a most welcome and generous act, but it meant I couldn't dash off to Get Knitted for the correct ones. On his return we hit our local Garden Centre/Department Store and then John Lewis just before closing time, but without success on my mission. The only alternative (apart from waiting until the shops opened on Monday and not knitting for 36 hours or so)was to master the Magic Loop, which I think I've now done. I don't especially like it but it saves buying another set of needles and it has grown on me slightly now it's becoming more automatic.... 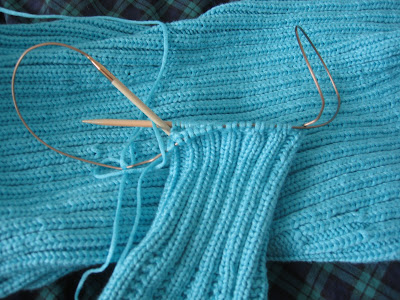 The yarn I'm using, Lana Grossa New Cotton Seta, is proving a joy to use even if the balls are prone to falling apart and tangling in use. The yarn is also tinting my wooden needle points a delicate shade of turquoise but I can live with that as it isn't doing the same thing to my fingers, as far as I can see. I hope it feels as good to wear as it does to work with in this humid weather we're having. I would find wool a trial at the moment.
Posted by Sue at Tuesday, June 19, 2007 No comments:

Apart from being the HQ of the Somerset Fire Service, Hestercombe is home to a beautiful garden which is being restored. Having visited it a few years ago when it had just been opened to the public, it was interesting to revisit with Sarah, who was interested in architecture and water.

So here is a collage of Hestercombe snapshots, mostly but not exclusively of hard landscaping:- 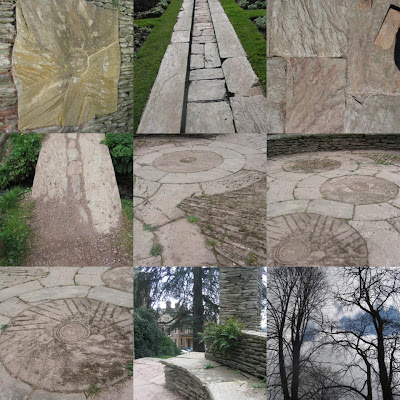 I love the texture of the stone, much of which (if not all) was quarried on site. It is inspiring me to work with these lines in textiles - let's see if the muse continues to influence me.
Posted by Sue at Friday, June 08, 2007 2 comments:

I can't believe how quickly this year is disappearing. It has been a rather hectic time for me; or rather, periods of hecticness interspersed by periods of prostration in the magic armchair due to abysmally low energy levels. 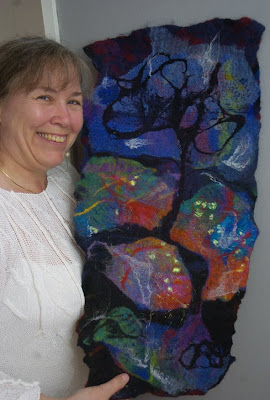 Throughout May I had an exhibition of my textile art here, at Gallery 370, which linked in with North Somerset Arts Week 2007, and then after a 5 day gap, put up a second at the Octagon Gallery at Castle School, Thornbury, S. Glos with my textile art group, Thread Carefully. I have posted images of some of my recently exhibited work on my companion blog, The Magic Armchair Traveller in Stitches. I had two pieces sell - to a pair of very discerning patrons of the arts - and so had a rush to produce two extra works for the Octagon show. Meanwhile, I had to put my dressmaker's hat on and make a ball gown for my younger daughter's Year 11 School Ball, just to ring the changes. 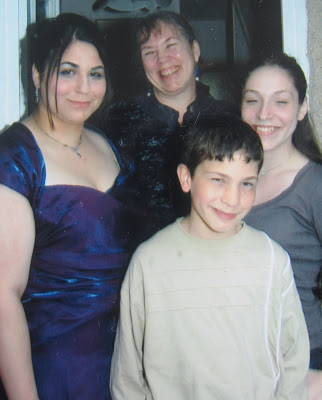 I've also had to label a large heap of civvy clothes for my son to take to Scout Camp and again to his Year 6 School Camp in the Forest of Dean - so I can look forward to another heap of laundry to do over the weekend, with the compensation of a lot of hugs which, I must confess, I am rather missing this week.

Eldest daughter Sarah is home for the summer, having completed her second year at university, and younger daughter Anna is at home quite a lot at present, studying for GCSE exams which require intermittent chauffeuse duties at present. She's also trying to find local jobs to apply for so she can earn the money to buy clothes, as she will not be required to wear school uniform for sixth form studies. Sarah has also been looking for paid work and had an interview this morning which looks hopeful. Thus we've had a week or two of extreme highs and lows in the gainful employment area.

I've also been collecting materials to create a wrap to commission, in autumnal shades of russets, browns and greens, in embellished filigree felt. I will start with dyeing some fibres soon, especially Wensleydale locks, which make such delicious fringes. I also have a pair of trousers cut out and waiting to be sewn, and a pair of curtains to complete....

Boredom? Pah! What's that? Except for the recurring days of hayfever, which are extremely boring and tedious in the extreme despite the mediation of anti-histamine.
At least I can see the glorious roses in the garden from the comfort of the Magic Armchair....
Posted by Sue at Thursday, June 07, 2007 1 comment: